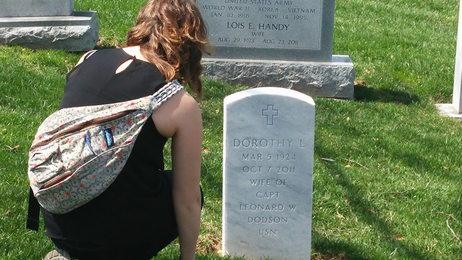 My great-grandfather, Leonard Dodson, met my great-grandmother, Dorothy Neal, at his sister's church. Dorothy was the preacher's daughter she was 14 and on that Sunday Leonard sat next to her at church he was 16. From that Sunday on he drove thirty miles just so he could see her. Soon they started courting and when they were both still young they got married. Dorothy was a sickly women but Leonard was always there to take care of her. Leonard attended seminary and soon became a pastor of a small church. Dorothy's medical bills got larger and larger and Leonard's humble salary just stopped being able to pay them. Soon after that they had a child on the way. He joined the navy to take care of his family and the medical insurance was just what he needed to take care of Dorothy. As a Navy Chaplain he was away from home and on ships often but still he as taking care of his Dottie.

This is all of this story I know but there is one more that will fully explain the love between them.

The last year of Dorothy's life was a hard one. Dorothy had a stroke and she was hard to understand. Leonard at this point in their marriage could tell what she needed before she even asked. He catered to her every need and he did everything to keep her safe from a fall or anything else that could happen to her. One day Leonard got up from his chair to go to the bathroom he told Dorothy not to try and get up that he would be right back. At this point she was using a walker. No one knows what went through her mind but she tries to get up without her walker and she fell and broke her hip. She was taken to the ER then put in to a nursing home where Leonard never left her side he slept in the empty bed near her. She only opened her eyes once more. Leonard, as he sat near her and family, trickled in and out he told them stories of her and their love story.
Dorothy Dodson was by herself an amazing women she loved her family and friends. Even though alone she was amazing she was not whole, her husband Navy Chaplain Leonard Dodson completed her as she completed him. They were a perfect couple. But she was not just an amazing woman she was a wonderful great-grandmother.