Science Hill High School senior Jonathan Shackelford said he had no real direction in life as a freshman.  Then he joined JROTC and found his calling.

Shackelford has already been accepted at East Tennessee State University next fall, where he plans to major in engineering technology while going through the school’s Army ROTC program.  He will be commissioned as a second lieutenant in the Army upon graduation from ETSU.

Shackelford said he began SHHS’s Army JROTC at the suggestion of a faculty member because he was unsure of what direction to go in life.

Now he is a cadet lieutenant colonel and as such is a battalion commander, something he would hard to accomplish throughout his four years of high school.  His confidence and skills have become honed throughout his journey, he said.

“I know how to run an organization like the back of my hand,” Shackedlford said Wednesday morning at SHHS, wearing a fine pressed uniform and sporting a chest full of colorful medals.

“I have more confidence in myself,” he said.  “I’m physically fit.  And I believe there’s nothing I can’t do.”

Shackelford and his fellow cadets were presenting for a special third-year formal evaluation Wednesday.  During this inspection cadets were evaluated by senior commanders on forming ranks, platoon drills and their knowledge of the JROTC curriculum.

The cadets were a gain designated as an honor unit with distinction, the highest level of evaluation possible, said Col. Mike Johnson, who is the JROTC instructor at SHHS.

Johnson is in his first year as JROTC instructor at SHHS.  He was formerly national director for Army JROTC, which has 1,645 programs across the nation and overseas.

Johnson graduated from SHHS in 1976.  He was in JROTC and continued with ROTC at East Tennessee State University.

Johnson said the JROTC is about training good citizens and is not a recruitment tool for the Army.  Motivating young people to become better citizens is the mantra of Army JROTC, Johnson said.

“They are much more attuned to their surrounding,” Johnson said of JROTC cadets.  “They’re much more able to adapt to a changing situation.  They don’t get flustered.”

Johnson said a large part of the training JROTC cadets receive fit with what employers are seeking in those they hire: dependability, reliability, confidence and capability.

This is accomplished by placing cadets in leadership positions.  Enrolled students can take one of their four semester courses in the JROTC program each semester.  Part of the curriculum involves community service.  This year’s main project involved collecting donations for the Washington County/Johnson City Animal Shelter.

JROTC has statistics to back up its mission of training good citizens.  According to nation Army JROTC data from 2008-2009, attendance at school and graduation rates are better than in the general population of students.

Jessica Lang, a freshman at SHHS, joined JROTC because she thought it would be fun.

“I was right,” she said.  “We get to do a lot of interactive things in class and we have fun while we learn different leadership styles and about personal finance and our futures.”

Lang plans to go to Lee-McRae College in Banner Elk, N.C., and become a therapist.  She does not know if she will pursue the military after high school.  She should be prepared for any path, though. 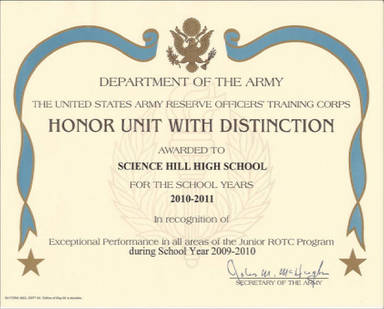 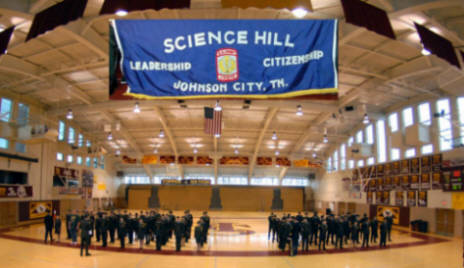 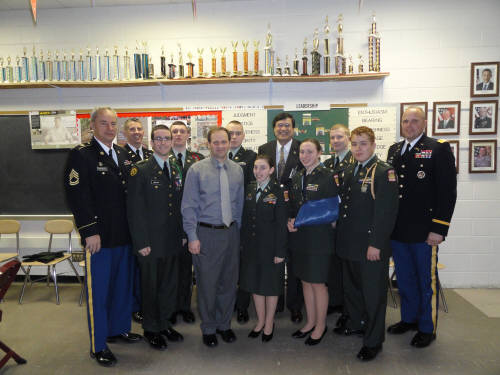 HONOR UNIT WITH DISTINCTION !!!!  Cadets of the Topper Battalion earned the highest level of award possible during their Annual Formal Inspection.  Cadets were inspected by a Senior U.S. Army Cadet Command representative from Fort Knox Kentucky.