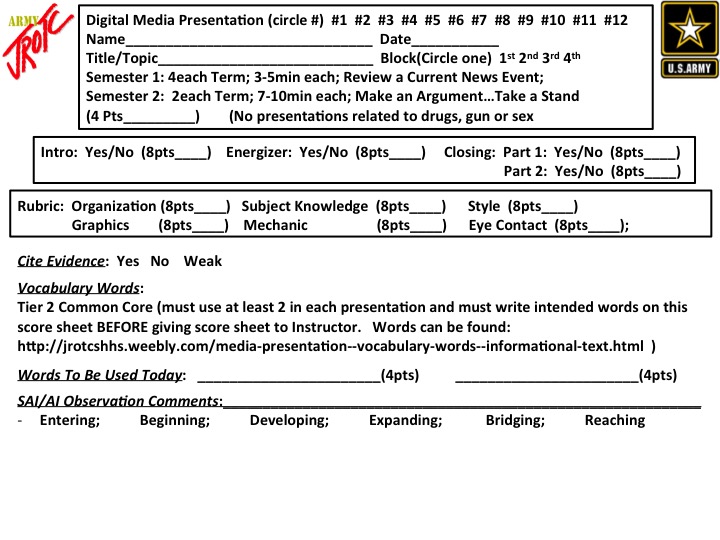 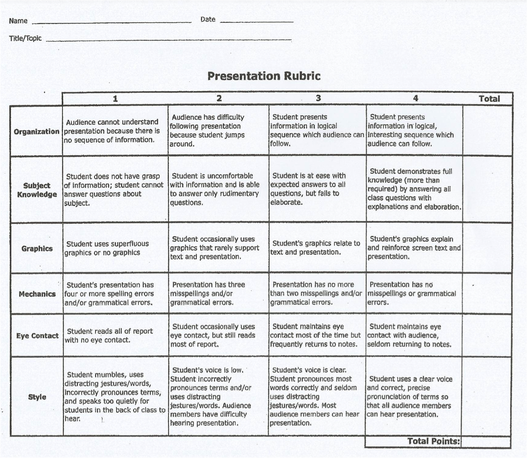 This sheet contains the requirements for the six evaluated areas in the scoresheet above (Organization, Knowledge, Graphics, Mechanics, Eye Contact and Style). 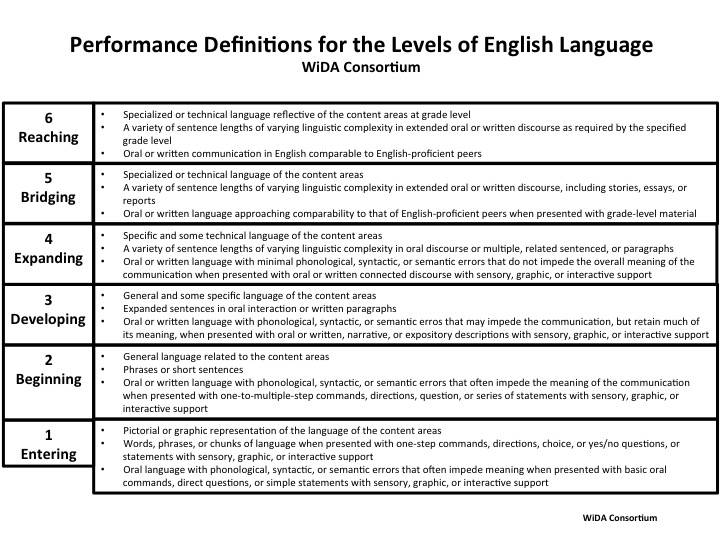 Vocabulary - High Frequency Academic Vocabulary Words
Cadets are to use at least two of the words below in every Media Presentation...the goal is to use each word at least once during SY 2013-14.

Informational text is defined as text with the primary purpose of expressing information about the arts, sciences, or social studies. This text ranges from newspaper and magazine articles to digital information to nonfiction trade books to textbooks and reference materials.

Narrative informational text typically communicates accurate information and has a well-defined beginning, middle, and end; it is written much like a story and is read from beginning to end. For example, Mike Allegra’sSarah Gives Thanks details Sarah Josepha Hale’s role in making Thanksgiving a national holiday. Lita Judge’sBird Talk is a good example of narrative informational text that provides facts about how birds communicate as they hunt, nest, get to know one another, and protect their young.

Informational poetry weaves facts into poems, as in Douglas Florian’s UnBEElievables, which includes not only poems but also brief factual paragraphs to accompany each selection. Likewise, Susan Katz’s The President’s Stuck in the Bathtub contains poems with little-known facts about the presidents. More factual information can be found in footnotes and a section called “Presidential Notes and Quotes.”

Finally, informational alphabet and counting books allow authors to use a creative format to share factual information, as in Alan Schroeder’s Ben Franklin: His Wit and Wisdom from A–Z. Schroeder includes details of Franklin’s life and his sayings in a clever, almanac style.

Expository texts, such as Carolyn Vaughn’s Invitation to Ballet, Peter Chrisp’s Pirates, and Stephen Person’sSaving Animals from Hurricanes, contain tables of contents, indexes, or other navigational devices so that readers may read only the portions of the books that interest them, making it unnecessary to read the books cover to cover. Even books for younger readers, such as Gail Gibbons’ Ladybugs, can include carefully labeled, detailed diagrams that help readers better understand the subject.

Expository texts utilize various text structures, such as description, cause and effect, comparison and contrast, problem and solution, question and answer, and temporal sequence.

Argument or persuasion texts provide evidence with the intent of influencing the beliefs or actions of the target audience. These texts typically include claims, evidence, and warrants to explain how the evidence is linked to the claims. Writers of persuasion or argument also make appeals—appeals to the author’s credibility, to the audience’s needs, or to reason and evidence. Good examples of biographies that offer persuasive arguments about issues related to women’s rights include Tillie the Terrible Swede, by Sue Stauffacher;Wheels of Change, by Sue Macy; and Write On, Mercy!,by Gretchen Woelfle. These books argue that although legislation and suffrage were important for the rights of women, so were means of transportation, such as the bicycle, and writing under one’s own name.

Procedural texts provide step-by-step guidelines that describe how to complete a task. They often include a materials-needed section and graphics that illustrate the process, as found in Doug Stillinger’s The Klutz Book of Paper Airplanes. Jane Drake and Ann Love’s Get Outsideprovides readers with rules for games and directions for making things like bird feeders, kites, and sundials.